In recent years there has been a development in the weighing of product. Growers are weighing less and less themselves, and the quantity of temporary labor is increasing by the year. Practice shows that control on labor and product is of paramount importance for many companies. However, LRE Weegtechniek sees a completely different picture in the workplace of a large number of companies.

For customers without software registration, we often see that they do not know what is going on in the workplace. Packages are sometimes randomly checked for content and weight, and nobody bothers about the weighing speed of employees. For example, LRE saw at one of their own customers that the percentage of give-away per package had unnoticed gone up to as much as 5%. On a weekly basis, this amounted for the grower to a large part of the realized profit. With the deployment of smart weighing and software modules, LRE has reduced this to a give-away of almost nil.

The basic dashboard shows you a live overview of what is going on in the workplace. The essential weighing data per employee will be presented in tabular form, such as:

To give a good picture of the quality of weighing, the employees are ranked as best-to-worst on the basis of speed and accuracy. This allows you to intervene directly on the basis of work performance. 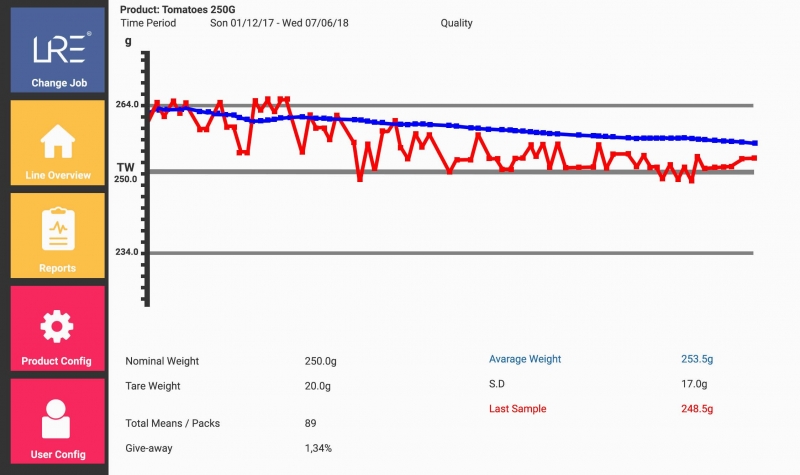 In order to get the most out of the work performance of each individual employee, LRE makes a distinction based on work experience, as this affects the speed of weighing. In the software module, each employee can be connected to a target based on an average number of packages per minute, with qualification of starting, average or experienced employee. In the basic dashboard you can see whether the employee reaches his or her level. The employee, on the other hand, sees a smiley face in the color of green or red on the screen of the DTS-V weighing solution. If the employee meets the predefined standard, the smiley face will turn green. If this is not the case, a red smiley face is shown 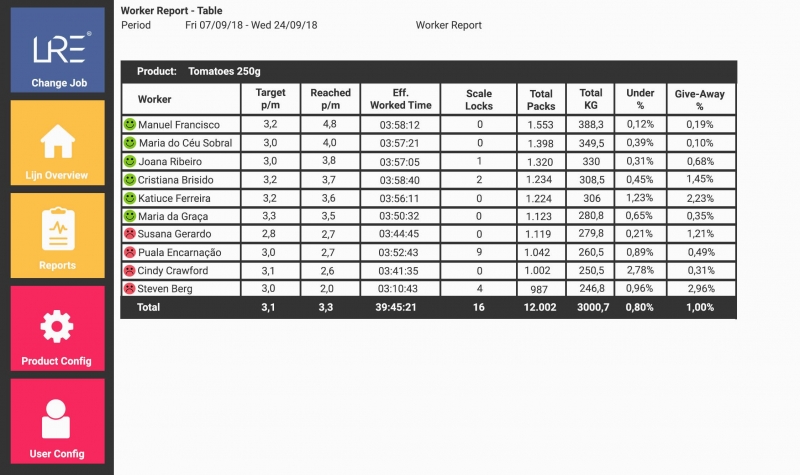 In order to get the most out of every employee, after a few days a starting employee automatically shifts to an average-level employee. This is the same with an average employee. Do you want to challenge an experienced employee more? The smart software has an advanced functionality, whereby employees, who perform above normal, are additionally challenged by an automatic downward adjustment of the product limits on the basis of performance. In this way, the employee is continuously challenged to weigh more accurately and the percentage of give-away is further reduced.